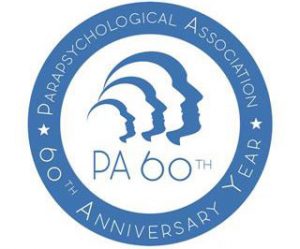 60th Anniversary Celebration Speakers. We have a great lineup of speakers for our 60th Anniversary Celebration in Columbus, Ohio June 16-17th, 2017.  The weekend will begin with a reception at the Upstairs Arts Space on Friday night and a day of talks (see the Provisional Program) on Saturday, followed by a banquet dinner at Bleu & Fig. All proceeds from both the fundraising campaign the and weekend celebration will go toward funding our archive project, so your registration donation will be valued for generations to come.

Register if you can join us in Columbus, or Donate if you can’t. Either way your contribution will go toward making 60 years worth of parapsychological research available to everyone.

PA Vice President Wim H. Kramer obtained his degree in clinical and experimental psychology at Utrecht University, the Netherlands. He practiced for five years as a clinical psychologist specialized in counseling clients reporting ‘paranormal experiences’. He continued his career for 15 years in several senior management positions in the telecoms industry and obtained a Dutch (Nyenrode University) and US (Simon school, Univ. of Rochester, NY) degree in business administration. Currently he holds the position of Managing Director of the Dutch Foundation Het Johan Borgman Fonds.

Edwin C. May is the president and founder of the Laboratories for Fundamental Research, Palo Alto, California. Formerly, he was a scientist with the U.S. Government’s secret ESP program popularly known as Star Gate from 1976-1995, and was the director of the program from 1985 to 1995. He is the author of several articles in the nuclear physics literature, more than 100 papers in the technical journals of parapsychology, and over 300 technical final reports on ESP to the government. He received his doctorate in experimental nuclear physics from the University of Pittsburgh in 1968.

Jeffrey J. Kripal is a historian of religions by training, receiving his Ph.D. from the University of Chicago Divinity School in 1993. He currently holds the J. Newton Rayzor Chair in Philosophy and Religious Thought in the Department of Religious Studies at Rice University, where he also chairs the department. His areas of interest include the comparative erotics of mystical literature, the history of American metaphysical religion, the history of Western esotericism, particularly as this complex has encountered and incorporated Asian practices and ideas in the modern period, and, most recently, the interface between the paranormal and American popular culture.

Executive Director of the PA Annalisa Ventola is an educator, researcher, and administrator in the field of parapsychology with a particular interest in science communication and spontaneous case research. She is the editor of Public Parapsychology – a website dedicated to communicating parapsychological advances to lay audiences. A resident of Columbus, Ohio, she has organized and presented research at many international conferences and published several studies on haunting experiences as well as co-authoring several primers on field investigation techniques. Locally, she also enjoys supporting music and the arts while teaching classical piano part-time and managing an art gallery in her Clintonville studio.

Brandon Massullo is a licensed professional clinical counselor (LPCC) in the state of Ohio and has been working in the mental health field for almost a decade. He has a masters degree in Community Counseling from the University of Toledo, and also obtained an Msc in Psychological Research Methods while conducting research in the Koestler Parapsychology Unit at the University of Edinburgh.  There his research focused on environmental sensitivity and paranormal experiences, and his work has been cited in numerous parapsychological journals, articles, and mainstream books.

Edward James Dean is undertaking PhD research at University College Cork. Investigating the role of the body in the performance of telepathy, and the role of play in the performativity of the paranormal, he won first prize in the 2015 UCC Doctoral Showcase. He has an MFA in Physical Theatre from the Accademia dell’Arte, an MPA in Strategic Public Policy from the American University of Paris, is a certified instructor of EBAS (elemental body alignment system), and a student member of the PA. He is a former circus instructor at the School of Acrobatics and New Circus Arts (SANCA). His paper, (Re)Discovering the Body in Mentalism, has been published in the University of Huddersfield’s Journal of Performance Magic.

Register today to reserve your seat for this extraordinary event! 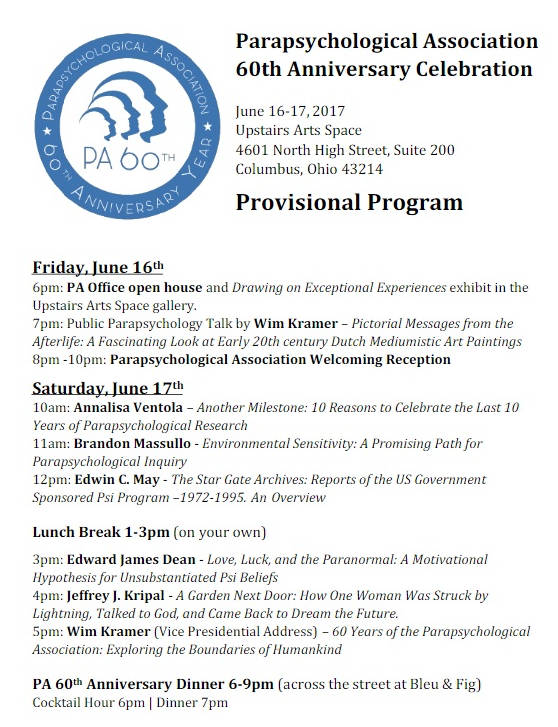